The Max Euwe Center in Amsterdam 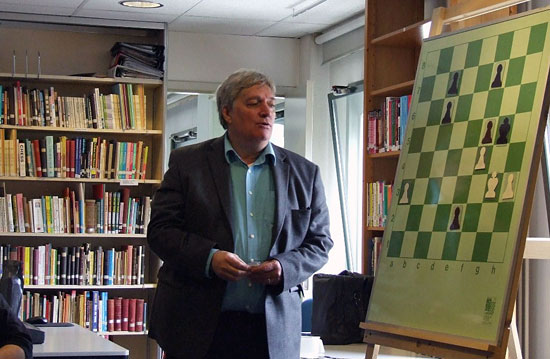 The Max Euwe Center in peril

by Frederic Friedel
8/13/2015 – He was the only amateur chess player to become World Champion – the fifth in chess history. After his death in 1981 the city of Amsterdam established a Center with a museum and a modest library containing Euwe’s chess inheritance and books. Now, after 24 years, the city is threatening to withdraw it subsidy. World class players are protesting. Can the Max Euwe Center be saved?

The Max Euwe Center in Amsterdam Machgielis («Max») Euwe was a Dutch chess mathematician, grandmaster, and author, was born on May 20, 1901 in Watergraafsmeer, near Amsterdam. He studied mathematics at the University of Amsterdam, earning his doctorate in 1926. Euwe taught mathematics, first in Rotterdam, and later at a girls’ Lyceum in Amsterdam He became the fifth World Chess Champion when he beat Alexander Alekhine in 1935, but lost his title to the same player two years later. He was noted for his logical approach to the game – his title matches with Alekhine were displays of tactical ferocity from both sides, since Euwe, according to Rueben Fein, «strode confidently into some extraordinarily complex variations if he thought logic was on his side; and he was extremely good at calculating these variations.»

Euwe also served as President of FIDE, the World Chess Federation, from 1970 to 1978. In this role he tended to do what he considered morally right rather than what was politically expedient. On several occasions this brought him into conflict with the USSR Chess Federation, which thought it had the right to dominate matters. Max Euwe died in 1981 at the age of 80 of a heart attack. In 1986 the Max Euwe Center was established in Amsterdam. Initially the Center directed its energies towards maintaining a small museum and a modest library, which contained part of Euwe’s chess inheritance and his books. Since then, the museum (run by dedicated and friendly volunteers) has been expanded with chess sets from all over the world and a large collection of unique photographs related to chess tournaments and matches. In addition to the fixed museum, exhibitions succeed each other on a regular basis. The library now contains well over 10,000 books on a wide range of chess subjects and a large number of journals, both domestic and foreign. They may deal with purely technical matters, but also with the history of chess and the interconnections between chess and numerous fields of science. Chess, after all, is more than just a game. The famous sculpture of Euwe in front of the MEC… … which overlooks a giant chessboard … where people can enjoy informal games of chess [photo TripAdvisor] Chess training sessions at the Max Euwe Center in Amsterdam

Every year the MEC organizes a big summer chess festival with top grandmasters giving simultaneous displays. As part of the MEC’s objective to promote chess, regular training sessions are being organized at the Center, newsletters appear a few times a year, schools frequently visit, an exchange market is held twice a year, and during important matches the Center provides a running commentary. Last year the MEC had 2,250 visitors from sixty different countries. In 1991 the City decided to name the square in honor of Max Euwe – the «Max Euwe Plein» lies Leidseplein and the Rijksmuseum.

Subsidy to be withdrawn?

The city of Amsterdam has provided a subsidy to the Max Euwe Center for some twenty-four years, but is now threatening to withdraw this fund. In a letter to the Members of the Amsterdam City Council a number of players have protested this «very shortsighted decision». Signatories of the letter are

Companies can support the MEC financially. In return the MEC can provide business chess tournaments, lectures or simultaneous exhibitions by top players. Of course, the sponsor will be invited to the biannual Euweborrel, our annual Town Square Festival and other sponsor meetings, for example the Tata Steel tournament in Wijk aan Zee. Any company that my consider a Sponsoring should contact Eddy Sibbing, manager of the MEC, or call at +31-20-625 7017.

In addition private chess friends can chip in by donating to IBAN: NL91 INGB 0005 4016 70 Stichting
Max Euwe Center in Amsterdam (giving «New donor MEC» plus name and address). Donors can write off the sum in their tax returns since the MEC is recognized as a charity organisation.

Frederic Friedel Editor-in-Chief of the ChessBase News Page. Studied Philosophy and Linguistics at the University of Hamburg and Oxford, graduating with a thesis on speech act theory and moral language. He started a university career but switched to science journalism, producing documentaries for German TV. In 1986 he co-founded ChessBase.